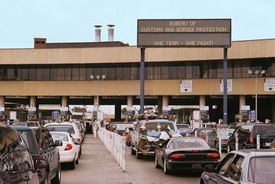 Republicans and the supporters of Trump's Muslim ban, nativists and other anti-immigrationists can just shut up. Nobody is fooled by your faux compassion for the Afghans. Conservatives bemoan that Afghanis may not be able to leave Afghanistan, while at the same time throwing out an American unwelcome mat.

I especially don't want to hear from those who cheered and supported our occupation of Afghanistan.

“If history is any guide, and it’s always a guide, we will see many refugees from Afghanistan resettle in our country, and over the next decade, that number may swell to the millions,” Tucker Carlson said on his FOX News program. “So first we invade, and then we are invaded.”

“Is it really our responsibility to welcome thousands of potentially unvetted refugees from Afghanistan?” Fox News host Laura Ingraham said on her Monday show. “All day, we’ve heard phrases like, ‘We’ve promised them.’ Well, who did? Did you?”


The views and claims expressed by contributors are their own and do not necessarily reflect the views and beliefs of SelectSmart.com. Not every statement made here can be assumed to be a fact.
Comment on: "I am sick of hearing the phonies' sudden concern for Afghanistan's refugees."