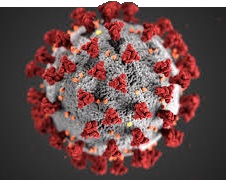 He tested positive. He's had Covid for a week. He is 70 years old and fully vaccinated. His symptoms are rather mild, along the lines of a bad cold. But a runny nose, headaches, body aches, and chills are nothing to sneeze at!

He's a doctor so he's had to shut down his office for the past week and probably next week too. His wife also has Covid and her condition is about the same as his. When he called me today, he was in the woods above his home walking his dog.

Locally, the unvaccinated who are exercising their "right" to infect the community, are selfishly hogging the beds and health workers' time in our local hospitals and clinics. We've had more Covid cases in recent days than we had last year before the vaccine. That's because the Delta strain is more virulent.

Asante and Providence Hospitals in Medford, Ashland and Grants Pass say they’re beyond capacity in the face of a flood of new cases of the Delta variant.
Officials from the counties’ health departments and local hospitals met Thursday morning for a press conference, where they painted a dire picture of what they’re seeing on hospital floors.

“If you come to our hospital for any reason, we might not be able to help you,” says Amanda Kotler, Vice President of Nursing at Asante. “We're out of beds, our staff are stretched, and we have limited resources. We are trying, but we're running out of options.”

The region’s hospitals say their emergency waiting rooms are crowded with up to 50 people at a time, and many people are having to wait up to six hours to be seen. Hospital staff are having to treat patients in hallways because they don’t have enough space.

“And that might get to the point where we’re utilizing cots in conference rooms, if necessary," says Chief Medical Officer Jason Kuhl of Providence Medford Medical Center.

“That's 350 people that could be in pain or need life-saving treatment that have had to wait,” Kotler says.


The views and claims expressed by contributors are their own and do not necessarily reflect the views and beliefs of SelectSmart.com. Not every statement made here can be assumed to be a fact.
Comment on: "My friend has Covid. He'll be okay. His patients may not be."