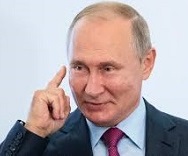 In August 2020, U.S. counterintelligence chief William Evanina identified Derkach as a key participant in Russian efforts to harm Joe Biden's candidacy in the 2020 U.S. presidential election. United States intelligence community analysis released in March 2021 found that Derkach was among proxies of Russian intelligence who promoted and laundered misleading or unsubstantiated narratives about Biden "to US media organizations, US officials, and prominent US individuals, including some close to former President Trump and his administration." Trump's personal attorney Rudy Giuliani met with Derkach in December 2019.


(DOJ)A seven-count indictment was unsealed today in federal court in Brooklyn charging Andrii Derkach, 55, of Ukraine, with conspiracy to violate the International Emergency Economic Powers Acts (IEEPA), bank fraud conspiracy, money laundering conspiracy, and four counts of money laundering in connection with the purchase and maintenance of two condominiums in Beverly Hills, California. Derkach allegedly concealed his interest in the transactions and violated sanctions imposed in 2020. Derkach remains at large. The charges and forfeiture action announced today include the first use of criminal and forfeiture powers targeting the concealment of ownership by senior foreign political officials, passed as part of the National Defense Authorization Act of 2021.

“The conduct of this Kremlin asset, who was sanctioned for trying to poison our democracy, has shown he is ready, willing and capable of exploiting our banking system in order to advance his illicit goals,” said U.S. Attorney Breon Peace for the Eastern District of New York. “The U.S. will not be a safe haven where criminals, oligarchs or sanctioned entities can hide their ill-gotten gains or influence our elections. This office, together with our law enforcement partners, will use every tool available to prosecute those who evade sanctions and abuse the U.S. financial system, and we will identify, freeze and seize criminal proceeds whenever and wherever possible.”

“Kremlin-backed Ukrainian politician and oligarch, Andrii Derkach, was sanctioned for his efforts to influence the 2020 U.S. Presidential election on behalf of the Russian Intelligence Services,” said Assistant Director in Charge Michael J. Driscoll of the FBI New York Field Office. “While participating in a scripted Russian disinformation campaign seeking to undermine U.S. institutions, Derkach simultaneously conspired to fraudulently benefit from a Western lifestyle for himself and his family in the United States. The FBI will continue to use all the tools at its disposal to identify Russian intelligence operations, disrupt Russian information laundering networks and bring to justice those who seek to engage in criminal conspiracies to undermine the integrity of U.S elections and evade U.S. sanctions.”

“Attempting to enjoy the safety, security and freedoms of an open society, while secretly working to undermine that very society, is a hypocrisy that runs through every sanctions charge announced by the Task Force,” said Task Force KleptoCapture Director Andrew C. Adams. “It is a particularly egregious hypocrisy in the case of Andrii Derkach – sanctioned for attempts to undermine American democracy, while corruptly seeking to benefit from its protections.”


The views and claims expressed by contributors are their own and do not necessarily reflect the views and beliefs of SelectSmart.com. Not every statement made here can be assumed to be a fact.
Comment on: "Rudy Giuliani’s Russian Spy Pal Charged With Money Laundering. Andrii Derkach supplied bogus dirt on the Bidens."